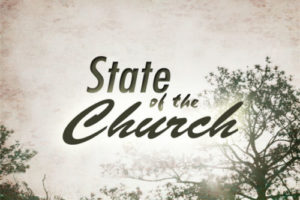 The following article is taken from BARNA Research Group. It won’t be for everybody, but for those interested in what is happening in our country, as far as the CHURCH is concerned, you’ll find it extremely interesting. Enjoy:

The Christian church has been a cornerstone of American life for centuries, but much has changed in the last 30 years. Americans are attending church less, and more people are experiencing and practicing their faith outside of its four walls. Millennials in particular are coming of age at a time of great skepticism and cynicism toward institutions—particularly the church. Add to this the broader secularizing trend in American culture, and a growing antagonism toward faith claims, and these are uncertain times for the U.S. church. Based on a large pool of data collected over the course of this year, Barna conducted an analysis on the state of the church, looking closely at affiliation, attendance and practice to determine the overall health of Christ’s Body in America.

Most Americans Identify as Christian
Debates continue to rage over whether the United States is a “Christian” nation. Some believe the Constitution gives special treatment or preference to Christianity, but others make their claims based on sheer numbers—and they have a point: Most people in this country identify as Christian. Almost three-quarters of Americans (73%) say they are a Christian, while only one-fifth (20%) claim no faith at all (that includes atheists and agnostics). A fraction (6%) identify with faiths like Islam, Buddhism, Judaism or Hinduism, and 1 percent are unsure. Not only do most Americans identify as Christian, but a similar percentage (73%) also agree that religious faith is very important in their life (52% strongly agree + 21% somewhat agree). Attending Church Is a Good Indicator of Faith Practice
Even though a majority of Americans identify as Christian and say religious faith is very important in their life, these huge proportions belie the much smaller number of Americans who regularly practice their faith. When a variable like church attendance is added to the mix, a majority becomes the minority. When a self-identified Christian attends a religious service at least once a month and says their faith is very important in their life, Barna considers that person a “practicing Christian.” After applying this triangulation of affiliation, self-identification and practice, the numbers drop to around one in three U.S. adults (31%) who fall under this classification. Barna researchers argue this represents a more accurate picture of Christian faith in America, one that reflects the reality of a secularizing nation.

Another way Barna measures religious decline is through the “post-Christian” metric. If an individual meets 60 percent or more of a set of factors, which includes things like disbelief in God or identifying as atheist or agnostic, and they do not participate in practices such as Bible reading, prayer and church attendance (full description below), they are considered post-Christian. Based on this metric, almost half of all American adults (48%) are post-Christian.

Most Americans Attend Small to Medium Churches
As far as Barna is concerned, regular church attendance is central to understanding faith practice among American adults. Whether their church is large or small, charismatic or traditional, significant numbers of Americans sit in the pews each Sunday to worship together. Despite the enormous cultural impact of megachurches and megachurch pastors like Joel Osteen and his 40,000+ Lakewood Church, the largest group of American churchgoers attends services in a more intimate context. Almost half (46%) attend a church of 100 or fewer members. More than one-third (37%) attend a midsize church of over 100, but not larger than 499. One in 11 (9%) attends a church with between 500 and 999 attenders, and slightly fewer (8%) attend a very large church of 1,000 or more attendees.

There Are More Churched Than Unchurched Americans
Digging deeper into church attendance, Barna uses another metric to distinguish between two main groups: those who are “churched” versus those who are “unchurched.” Churched adults are active churchgoers who have attended a church service—with varying frequency—within the past six months (not including a special event such as a wedding or a funeral). Unchurched adults, on the other hand, have not attended a service in the past six months. (They may be dechurched, meaning they once attended regularly, or purely unchurched, meaning they have never been involved in a Christian faith community.) Under these definitions, a slight majority of adults (55%) are churched—though the country is almost evenly split, with 45 percent qualifying as unchurched adults.

Christians Are More Generous Than Their Secular Peers
In Matthew 6, Jesus lays out three essential components of discipleship: prayer, fasting and almsgiving. The latter of the three, which we might also call justice and personal charity, is one of the pillars of a healthy spiritual life.Though residents in some cities are more generous than others, Americans give to churches more than any nonprofit organization. More than half of Americans (54%) have given money to a church in the past year—half that number have given to a nonprofit other than a church (22%). The remaining one-quarter (24%) have given to neither. Unsurprisingly almost all practicing Christians (94%) have given to a church, compared to one-quarter (23%) of atheists or agnostics. In fact, practicing Christians tend to be more generous overall than their secular counterparts: 96 percent of practicing Christians gave to a church or a nonprofit, compared to 60 percent among atheists and agnostics. Americans Express Their Faith in a Variety of Ways
While regular church attendance is a reliable indicator of faithful Christian practice, many Americans choose to experience and express their faith in a variety of other ways, the most common of which is prayer. For instance, three-quarters of Americans (75%) claim to have prayed to God in the last week. This maps fairly well onto the 73 percent who self-identify as Christian. Following prayer, the next most common activity related to faith practice is attending a church service, with more than one-third of adults (35%) having sat in a pew in the last seven days, not including a special event such as a wedding or funeral. About the same proportion (34%) claim to have read the Bible on their own, not including when they were at a church or synagogue. About one in six American adults have either volunteered at a nonprofit (19%) or at church (18%) in the last week. Slightly fewer attended Sunday school (17%) or a small group (16%). Evangelicals Are a Small but Influential Group
Classifications and metrics are vital to understanding the religious makeup of the United States. Barna uses several of these to identify key faith groups in America, including “born again Christians,” “evangelical Christians” and those who are “Bible-minded.” The largest of these groups are born again Christians, which make up roughly one-third of the population (35%). These individuals have made a personal commitment to Jesus Christ that is still important in their life today and believe that, when they die, they will go to heaven because they have confessed their sins and accepted Jesus Christ as their savior. The next largest group are those considered Bible-minded, who make up about one-quarter of the population (23%). They believe the Bible is accurate in all the principles it teaches and have read the Scriptures within the past week. Finally, the small (7%) but influential group of evangelicals are those who meet the born again criteria plus seven other conditions (detailed below), which are made up of a set of doctrinal views that touch on topics like evangelism, Satan, biblical inerrancy and salvation.

Americans Hold Both Orthodox and Heterodox Views
Religion and politics: two topics best excluded from polite conversation. This old adage appears to have the support of most Americans. When asked whether they, personally, have a responsibility to tell other people their religious beliefs, most people (54%) disagree (46% believe otherwise, very close to an even split). Getting at orthodoxy (or, rather, heterodoxy) among the American population, most (55%) agree that if a person is generally good, or does good enough things for others during their life, they will earn a place in heaven. Yet in spite of the popularity of the belief that good works is sufficient for eternal life, from a long list of options for ways to describe God, the majority (57%) choose the most orthodox view: that God is the all-powerful, all-knowing, perfect creator of the universe who rules the world today. Other views of God make up one-third (33%) of the responses, and one in 10 (10%) says there is no such thing as God.

About the Research
The study on which these findings are based was conducted via online and telephone surveys conducted in January 2016 and 2016. A total of 5,137 interviews were conducted among a random sample of U.S. adults, ages 18 years of age or older. The sample error is plus or minus one percentage point at 95-percent confidence level.

Born again: Have made a personal commitment to Jesus Christ that is still important in their life today and believe that, when they die, they will go to heaven because they have confessed their sins and accepted Jesus Christ as their savior.

Evangelical Christian: Meet the born again criteria plus seven other conditions. These conditions include saying their faith is very important in their life today; believing they have a personal responsibility to share their religious beliefs about Christ with non-Christians; believing that Satan exists; believing that Jesus Christ lived a sinless life on earth; asserting that the Bible is accurate in all that it teaches; believing that eternal salvation is possible only through grace, not works; and describing God as the all-knowing, all-powerful, perfect deity who created the universe and still rules it today. Being classified as an evangelical is not dependent upon church attendance or the denominational affiliation of the church attended. Respondents were not asked to describe themselves as “evangelical.”

Bible-minded: believe the Bible is accurate in all the principles it teaches and have read the Scriptures within the past week.

About Barna Group
The Barna Group is a private, non-partisan, for-profit organization under the umbrella of the Issachar Companies. Located in Ventura, California, Barna Group has been conducting and analyzing primary research to understand cultural trends related to values, beliefs, attitudes and behaviors since 1984.